According to the legend, the kings of Siam would gift a white elephant to courtiers who had rendered themselves obnoxious, in order to ruin the recipient by the cost of its maintenance. Based on that, the term “white elephant” is used to describe a possession which its owner cannot dispose of and whose cost, particularly that of maintenance, is out of proportion to its usefulness. 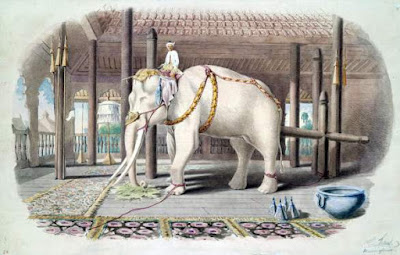 Birth
The birth of white elephants is usually a result of a match between cool ideas and resources. A future parent with a cool idea pitches it to the herd, which are carried away by it. The cooler the idea is, the bigger the resources allocated to create and maintain it. Many times the declared goal of the cub creation is to save efforts in the long term. Different ideas takes different forms. Common examples are tools that automate manual tasks, enforce a better process, save testers from writing code, etc.

Childhood
The early days of the white elephant are exciting. Brainstorming happens, designs are created and an 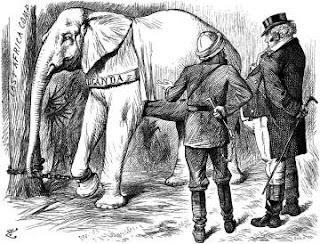 artist is invited.  He is freed from his usual less cool tasks, to give life and nurture the young elephant. New technologies and approaches are learnt. A lot of fun happens all around.
On the elephant’s first birthday, the POC is ready and a demo is presented to the herd. The herd is
excited. The elephant shows a great potential. The proud parents beam and relatives from distant places come to observe the miracle taking his first steps.

Youth
The elephant’s caretakers keep raising the cub. They take him outside so he can start living independently and begin contributing to the community. Often, the community members find out that the young beast is not stable enough. The community is very happy to receive him and show a high tolerance of his childish behavior in the early stages. This tolerance may be challenged by the elephant’s habit of requiring too much attention and performing incomplete work.

Adulthood
While the white elephant allegedly reached adulthood it still does not act like an adult.  On the one hand, the people enjoy his company and the cool atmosphere that he spreads around him and they are still hoping he fulfills his potential. On the other hand, each time they try to use him, they are disappointed. Often they continue using the ordinary work elephants and return the white one to his caretaker who still spends too much time nurturing him. On the outside, the picture looks much more ideal. Every guest is taken to see a demo of the white elephant working. His caretaker takes him to conferences within and outside the organization. Prestige is acquired as well as prizes. People still hope the elephant will fulfill the purpose of its creation, despite the growing concerns.

Death
Most of the white elephants dies naturally when the community gets rid of them. The community reaches a point where they lose hope of benefiting from the contribution they had imagined and understand that they do not gain real benefits from the white elephant. Getting rid of the beast is very painful to the people, but they understand that there is no choice. Many times, in order to ease the pain, the birth of elephant 2.0 is declared. The parents plan to make him a better elephant that won’t turn out to be a white one. A soon as the white elephant is gotten rid of, the pain is reduced.
In very rare cases, instead of killing the white elephant, the people are able to transform it. In most cases such attempts only consume more resources and delay the inevitable.

Spotting White elephants
No modern white elephant is designed to be one. The guy who can help us spot a white elephant, so we can kill him in early stages, is called Roi, or in his full long boring name: Return On Investment calculation.
When the community forgets to invite Roi to the party, no one is there to set real expectations of the elephant. The most romantic time, the birth of the cool idea, is also the time to make the non-emotional calculations of ROI.  It is the time to think about the possible lowlights the new approach is based on.
I suggest that as much as our idea is cool and looks good, so should our ROI calculation be ruthless, to make up for our strong bias in support of our idea.
Doing the ROI calculation once and forgeting about it, is a common mistake. The unexpected happens and turns our elephant into a white one. As more resources are consumed working on the idea, we are more biased towards it and we start to “throw good money after bad”. We tend to take into account the sunk costs. which is not a best decision making practice.

Monitoring the ROI, and continuously comparing our expectation to the reality, can help us identify our white elephant early, so we will be able to get rid of him before he consumes too much of our resources.

Can you spot the white elephant near you?

Posted by Issi Hazan-Fuchs at 3:30 PM No comments: