While writing about indicators and numbers, I remembered that James Bach described the moment when he realized that the test cases count he had been asked to give his manager was meaningless as a turning point in his career (utest blog, "Testing the limits" with James Bach).

smiling, I lean my head towards my laptop, taking a small nap.
Through the mist, an email message popped up to my face. The magical forest keeper forwarding me a message from the numbers monster: The numbers monster is hungry and wants me to give her some numbers.

I replied to the forest keeper: I understand that the numbers are very tasty, but they are complete junk food. We can ask the monster what is her purpose in digesting the numbers, so I will be able guide her to find some good herbs that will satisfy her, instead of fattening her with the junk food she asked for. 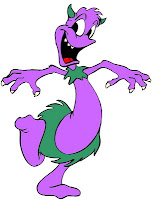 The forest keeper replied again in few seconds: The monster demand her numbers.

I replied back: our forests success depends on the monsters health. I know that she is used to the junk food that she gets from other creatures in the forest, but I don't think it is good for her. I watch monsters when they eat the numbers junk food, they start going in the wrong direction, and even when they go in the right direction, they waste the dwarfs energy supplying them junk food, instead of gardening the herb plot and taking care of the forest's prosperity.

My mind starts thinking how to convince the forest keeper to give up his tradition and do a better job for our forest, but then I woke up from the dream.

What do you do when you meet the forest keeper and the numbers monsters?
Posted by Issi Hazan-Fuchs at 8:35 AM 2 comments: