During the last week, we heard that the famous books illustrator Shmuel Katz (see also Hebrew Wikipedia article ) passed away. His biography as a holocaust survivor, Kibbutz member and an extreme left-wing activist may be very interesting, but he is most famous for illustrating the children’s book Dira Lehaskir ("Apartment for Rent") by Lea Goldberg which was written in 1959 and became one of the classics of Hebrew children's literature.


Katz’s painting on the book cover is also the most famous kid’s literature painting bug.
The book starts with the following words: "בְּעֵמֶק יְפֵה בֵּין כְּרָמִים וְשָׂדוֹת עוֹמֵד מִגְדָּל בֶּן חָמֵשׁ קוֹמוֹת", or in my free english translation "In a beautiful valley between vineyards and fields stands a five floor tower". 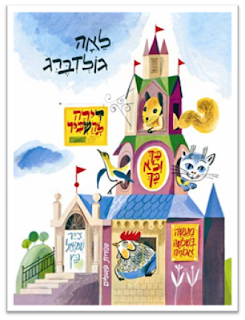 When Katz passed away, one of the T.V. channels broadcast a recent interview with him. In the interview he admits that he regrets the moment when he noticed that he painted only four floors(As you can see in the picture above) while there are five in the text. He didn’t take the time to fix his mistake since he believed that no one would notice. (Un)fortunely, the book become a best seller and he got many complaints about this bug for the rest of his life.

If you are in the business of Testing and Development that sounds familiar, no?

Even when the author himself is the illustrator bugs slip through the paintbrush.
The great Israeli Children books author and illustrator of the current century (And I can say that as a father of three who has been reading bed time stories for few years), Rinat Hoffer (No Wikipedia article about her yet) does it too. In her funny book “Tom’s day”,about a day's in a nutty girl's life, she asks:”What's Grandpa hiding in his coat? A toy car? Or a lollipop? No! today he brings Grandma Rachel!” Very funny, and when you open the coat you can actualy see Grandma Rachel hiding, but also a lollipop, which we just said is not there... My son spots the bug easily, and when we will have time we might complain to Rinat.

These are only two examples. From time to time me and my kids spot more bugs in our books. You are welcome to submit your examples in this posts' comments.

The thing that most annoys me when spotting such bugs is that I suspect that most of the time the bugs were spotted before the publishing of the books, but the editors did not have enough respect for our kids intelligence to think that they would notice the mismatches.

The analogy for SW development is obvious. Who didn’t hear “Who will ever use this feature?” or “No one will notice?”. We would better remember Katz’s lesson and respect the anonymous user.
Posted by Issi Hazan-Fuchs at 3:02 PM 1 comment: